Our reds have been flat-lining at a high count on the chart since November, pre-empting the steady increases seen through the winter in 2017, and autumn/winter in 2017/18. The September lows in both previous years probably reflect the autumn peak in tree seed abundance: remember, we should assume that higher numbers in our gardens reflect a relative lack of wild food elsewhere.  The March hotspots amongst 22 venues were familiar: five reds simultaneously at Skyreburn, with all of them recognisably different there as well as five others at both Cally and Anwoth. 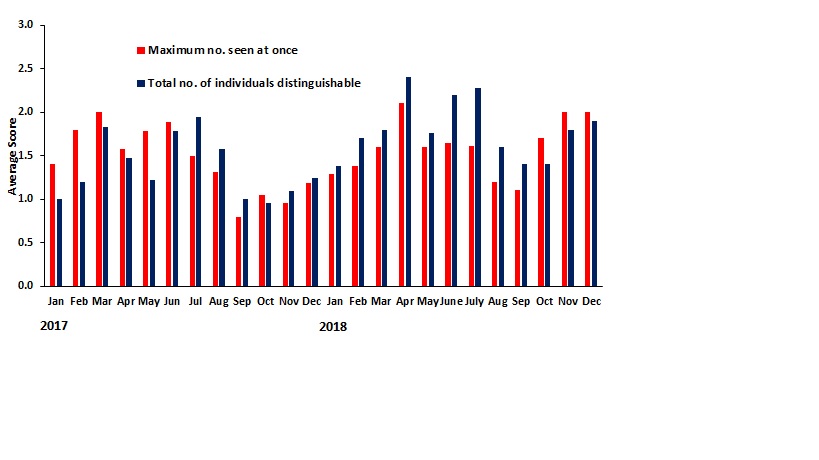 Recent camera-trapping with hoppers around Carsluith, Kirkdale and Barholm has failed to reveal any greys, with reds still present at several points. Several more greys have been removed recently after they were spotted using our thermal imager, and one has just been camera-trapped in Carstramon Wood. The cameras were put up for this purpose after a sighting, but they also captured two pine marten images. Another pine marten (presumably) was seen a few weeks ago near Cally Gardens, where a grey has also just been spotted on the garden wall. Any prompt encounters between predator and prey at these locations are likely to help our cause!

Last week I spent a morning with local youngsters on the Forest Fun activity week in Cally Woods. They played a modified version of tag featuring squirrels and pine martens, found animal footprints on paths, looked at squirrel hairs collected on sticky pads in feeders and talked about the varied appearance of red and grey squirrels. They correctly identified them from numerous photos, along with a pine marten. Maybe they were not typical of their primary school age-group, but they showed brilliantly that at least some young in our area are very knowledgeable about and appreciative of the natural world that surrounds them here on Bonnie Galloway. Lucky them!

Our plan for a public hide in the Cally Gardens woodland is still live! Hopefully a meeting in the coming week will finalise a design for costing – novel features such as a turf roof, as per the outdoor classroom at the school, have recently been suggested.