The reds in 21 of our gardens in December held steady at around two at once and two recognisable. Below is the updated chart showing the whole of the last two years since we started doing this survey: thanks to all those who have contributed. It will be interesting to see if the rising pattern in the early months of 2017 are repeated this year: note that the numbers for last month are similar to those for March-June 2017. The slower and later climb in numbers at the start of 2018 might reflect the previous good autumn seed crop, duly cached for use through the ensuing winter, with less need for reds to visit our feeders. Any further increase now would in any case give us all-time record-breaking numbers; let’s see! Particular hotspots in December were Skyreburn (7 at once), Cally and Anwoth (6 at once each). 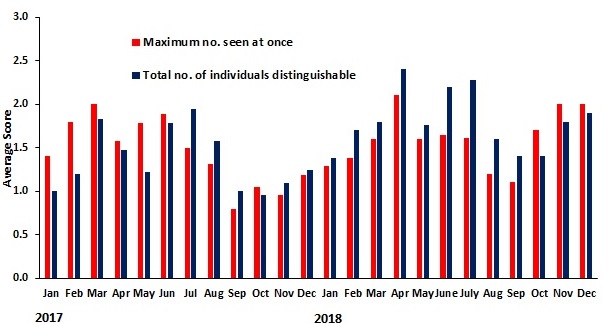 Since mid-December, a number of greys have been removed again from familiar sites up Skyreburn, near Knockbrex and at two locations in Carsluith. Additional sightings at Kirkdale and Ardwall also resulted in prompt removals, but other greys are still being pursued at Rusko, Kirkdale and Carsluith.

Our thermal imager is about to arrive and will promptly be put into use. Our explorations for a good site for an observation hide are focusing on Cally Woods and hopefully more progress can be made on this soon. The ‘squirrel’ road signs on Cally Drive do rather raise the expectations of visitors, so it would be good to provide a location at which reds can be seen reliably.