Thanks to sponsorship by the Barons Craig Hotel and Saving Scotland’s Red Squirrels, and organisation by the Solway Forests Red Squirrel Network, around 50 people gathered for great day of instruction and discussion, both in and out of doors at Rockcliffe. The idea was to focus for once on our native reds, and better equip volunteers to carry out meaningful survey work using a variety of techniques. Most of our Groups/Networks were represented, so hopefully the lessons learned will have a wide impact in South Scotland.

Stephanie Johnstone (Saving Scotland’s Red Squirrels) told us about their long-running Spring Survey. This involves volunteers in the collection of hair samples on sticky tabs placed in the roof of feeders positioned in more than 100 fixed locations in South Scotland since 2013. Her outdoor session shared with John Rae (Save Our Squirrel Berwick Group) dealt with the positioning, sterilising and baiting of both feeder boxes and simpler plastic ‘hair tubes’, as well as fixing and retrieving the sticky tapes or VelcroTM strips with hairs attached.  In a session at the microscopes later, Sarah Cooper (SSRS) gave people practice in distinguishing between red and grey squirrel hairs as well as those of pine marten (they also like the nuts on offer at the feeders!). Another session led by Rob Asbridge (Kirkcudbright Red Squirrel Group) had people constructing feeders.

Martin Webber (Forest Enterprise Scotland) showed us how to identify and systematically count conifer cones stripped for their seeds by squirrels (as distinct from mice and voles) along fixed lines on the woodland floor. Unfortunately, cones left by red and grey squirrels cannot be distinguished from each other. But in areas where greys are rare or absent, this technique provides an easy alternative to the more laborious collection of hair samples or deployment of camera traps, allowing regular assessments of red squirrel activity levels in conifer-dominated woodlands.

More time outside with John Rae covered the positioning of camera traps close to feeders (and live-traps), whilst back in the warm Rob Asbridge showed us several different makes of camera and discussed their settings. Generally, the pictures and videos obtained remove any doubt about the species of squirrel visiting a feeder, but unless you take certain precautions, you can also acquire thousands of images of birds and field mice raiding the larder provided!

Some humans pretended to be squirrels in the woods so that Andrew Hodgkinson (SSRS; pictured) could demonstrate how easy they were to spot using a thermal imager! These devices detect heat (infrared radiation) and show hot-blooded animals as bright shapes on a dull background at considerable distances. Walks in the woods to see squirrels (and other mammals and birds) are much more rewarding with an imager (as well as a pair of binoculars) round your neck, making it feasible (at last) to assess squirrel activity by direct observation. 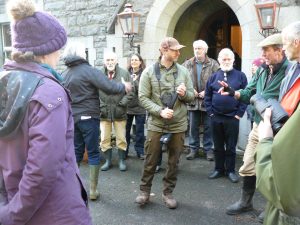