The local reds are now behaving slightly differently to this time last year. Our counts of reds from 19 venues in October were highly variable, with highs of six (Laurieston Road) and four (Skyreburn) being seen simultaneously, and up to six being identifiable at the latter site. The rest of the spreadsheet is peppered with zeros, ones and twos as the autumn slump in attendance continues. However, our averages are still up by about 50% on October 2017 (see chart below), perhaps reflecting the less good tree seed crop this autumn (except for acorns which are no good for reds), and thus a bit more dependence on the food we are providing in our gardens. 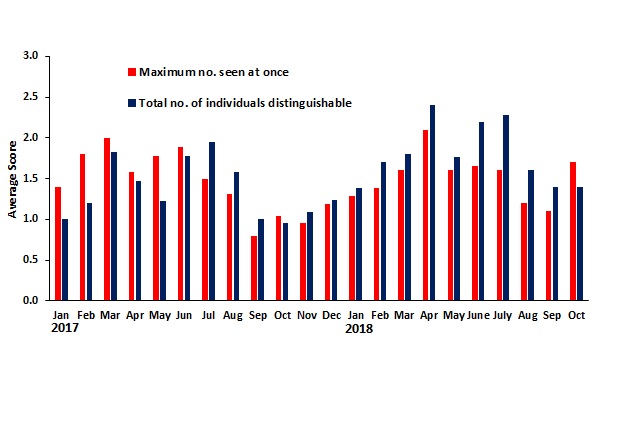 Summary of garden counts each month for red squirrels around Gatehouse in 2017/18. Number of contributing venues varied from 15 to 24.

Few greys have been reported to me since mid-October, but Ardwall, Skyreburn, Anwoth, Carstramon and Cally all featured. Several were removed, including two just short of Knockbrex. Given the general pattern of grey records over the years, it seems likely that these two will have come from (or through) Gatehouse to cross the Fleet and get down there. Few greys are spotted towards either Kirkcudbright or Castle Douglas, where woodland cover is lower and more fragmented – a landscape difficult for even the more adventurous greys to move through or colonise.